Places Mihai Has Committed Code From

I've been running lolcommits for 10 years, corresponding to most of my time at Quip and all of it (so far) at Tailscale. It captures a picture whenever there's a Git commit, and stamps it with that commit’s SHA and message.

Of the 22,000+ images, here are some notable(-ish) things that it captured (locations were determined with the help of Swarm).

This was in Quip's second office (a Regus suite).

Back when there were such things as “commutes”, I would take Caltrain to/from work. The fact that all of Quip ran on a laptop and didn’t need any connectivity was key to feeling productive in the ~2 hours a day spent on the train.

One of the perils of taking Caltrain is missing it (and having to wait 30 minutes for the next one). Luckily the weather usually allows for outdoor coding too.

The main room at Regus was pretty cramped, you can see Jon and Casey in the background.

Or possibly a pre-commit hook that took so long I stepped away.

Our new office was not quite ready before we had to leave Regus, so Jon graciously let all of us work from his house.

Our second office was above The Warfield. You might be able to live there some day.

Sometimes I would need a couple of extra minutes to wrap things up for the day, and end up doing it on the platform after I got off the train.

Two months after we moved in, the contractors realized that they had never tested the ceiling for lead paint (it was originally supposed to be painted over, but they then changed their minds).

We vacated the office until it was tested, and in the meantime we ended up working first from Ana/Casey’s house and then from Ryan’s.

Quip was not a “work all the time” company even in the startup days, but there were some commits done in the dark.

The only time I stayed late at the office was the day of our launch, when were waiting for an embargoed New York Times article about us to be published.

Apparently this was the first coffee shop I worked from.

Evening holiday parties were the only reason to wear a sweater and collared shirt to the office.

Awkwardly, the same outfit as the previous year.

In the last couple of weeks before my second son was born I worked from home to avoid having to scramble once labor began. That ended up happening a couple of hours after the emoji commit, leaving it to someone else to fix the broken build.

It's hard to capture sleep deprivation on a webcam.

Matt and I spent a couple of weeks in a lab on Apple’s campus to implement support in Quip for the Apple Pencil and iPad Pro support ahead of its launch. We weren’t supposed to tell anyone where we were, and technically these pictures are contraband.

My wife was working there at the time, and they were providing flu shots to employees and their spouses.

A nice space next to Blue Bottle

One of the perils of coding on Caltrain.

We increased the desk density a bit, hence the viewpoint change.

You can finally see the other side of the room.

Another year, another Apple conference.

It was too hot to wrap up coding on the train platform, so I did the post-commute Git push from my car (before driving).

We got new machines as part of the Salesforce acquisition (which closed around this time), and the camera was a bit better. You can also tell it's a slightly different lolcommit config because the quotes around the commit hash and summary are gone.

No sweater this year.

It moved to San Jose that year.

I think this is a partially-closed laptop lid, pointing the camera at the rug.

Working from the conference room where our (joke) "Employee of the Month" portraits were hanging.

We were back in the secret Apple lab, this time to prepare our app for the iPhone X launch. This time they made us put tape over the webcams.

Maximum density (and noise level) in the pre-Tower office. 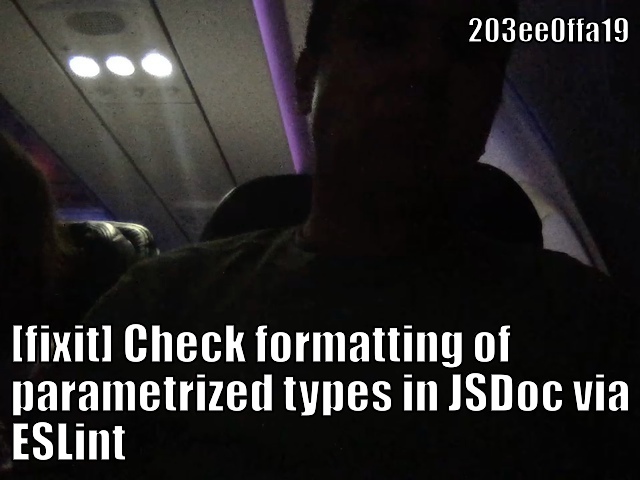 Must have been a Virgin America flight based on the lighting scheme.

Before the ATP live show during WWDC week.

We all had to leave the office early because of the impending Salesforce Tower move. This was the closest coffee shop to the San Francisco Caltrain stop.

The cleanest the windows ever were.

We were hacking together a demo before a sales conference.

The occasional Caltrain platform commits continued, this one had a particularly nice backdrop.

I could have used a haircut.

While the kids had their tennis lessons (we had some childcare complications that summer).

We were going as the family from Calvin and Hobbes.

Kids’ activities are starting to resume

I worked from Seattle for ~5 weeks, mostly on speculative projects.

Seeing a pattern yet?

You can tell that it’s a cramped economy seat because I can’t tilt the screen back.

While waiting for a swim lesson.

There were a few even earlier (my first day was April 25th), but I forgot to set up lolcommits on the new laptop.

While Tailscale is an all-remote/distributed company, we do have occasional meetups. This was my first time meeting my co-workers in person.

When waiting for a (nearby) appointment, convenience trumps coffee snobbery.

Like the previous summer, we spent a few weeks living in Seattle, for a change of scenery.

Our house was being cleaned, and it turned out there was a nice library a short walk away.

The whole company went on a fun trip, and some of us thought that coding too much fun to not do for a whole week.

Maybe in another 10 years the webcam quality will actually improve.

To make a HyperCard stack.